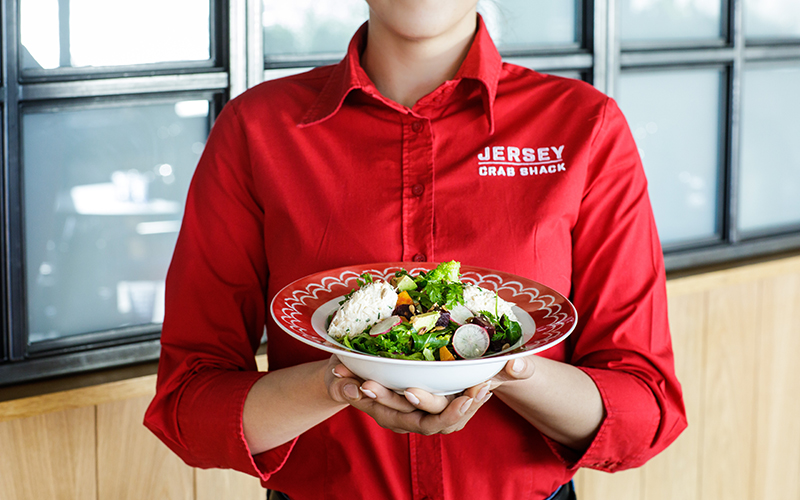 Relying on tips to make ends meet is commonplace in the hospitality industry: across restaurants, cafés, hotels and bars, skilled team members are paid little more than the minimum wage (and often just that), leaving them to supplement their income with gratuities in order to get by.

We wanted to challenge this convention; paying employees a fair wage for their hard work, and abolishing tips at our restaurants and cafés. All JPRestaurants employees now earn at least the Living Wage set by the Living Wage Foundation, giving them clarity over what they will earn, and an income that allows them to live with dignity as part of Jersey’s island community.

The below case study captures our journey a year on from becoming accredited Living Wage employers.

Tipping is ingrained in British culture, with most of us accustomed to paying an additional 10% – 15% for services, and particularly when we dine
out. For most, a tip is a way to reward good service: showing gratitude when we have been served well, and encouraging good service in the future. But with tipping a facilitator for low pay, should there still be a place for gratuities in modern-day society?

A practice that has its origins in the slave trade, tipping expects customers to supplement servers’ income through generosity, affectation, or a sense of duty. Studies have suggested that the prevalence of tipping has been encouraged by corporations, wanting to save on labour costs by justifying lower wages for employees. Research also suggests that, although customers like to have the choice, tipping actually has little impact on the quality of service.

Tips can also cause confusion or financial difficulties for staff: the instability of their income, which can be hugely affected by seasonality and other external factors, can make it hard to plan financially, and can make life decisions (such as taking out a loan or applying for a mortgage) almost impossible. This, coupled with the typically antisocial hours and tiring working conditions, can make hospitality an unappealing career choice: skilled staff often view the industry as a stepping stone to a more stable role, rather than a long-term career prospect.

With all this in mind, JPRestaurants took the decision, after 75 years, to remove tips at all of their restaurants and cafés; instead paying staff at least the Living Wage (60% earn more) as a stable, regular income. The wage takes into account the cost of living in Jersey, and aims to provide pay that lets employees live with dignity, rather than just surviving.

It was also important that, despite the higher hourly rate, employees were still motivated to give their best. Part of the mentality behind tipping is that it encourages and rewards better service, so JPRestaurants wanted to find a way of doing this that didn’t depend on customer generosity.

The company therefore took the decision to add an incentive payment to employees’ pay; reflecting both the financial performance of the restaurants, as well as the customer satisfaction ratings achieved by each venue (which are measured through post-visit surveys, completed by customers). This additional amount is paid on top of the Living Wage as extra financial motivation.

Moving to the Living Wage at a time of great uncertainty for hospitality following Brexit and the ongoing Covid-19 pandemic was a difficult decision. But with recruitment already a challenge, and prices increasing across the industry as a result of rising costs, it seemed a good opportunity for JPRestaurants to reset the way of doing things and move forward in the post-pandemic world.

After analysis of the average percentage left as a tip by guests in previous years, and comparison of JPRestaurants’ menu prices to those of competitors, JPRestaurants adjusted menu prices to reflect a new model without tips, covering the cost of service within dish prices.

Although around 10% higher at the company’s more premium venues (Banjo and Oyster Box), prices initially remained the same at the company’s casual restaurant brand (Jersey Crab Shack), where it was hoped that the introduction of an app to place orders would mean fewer extra seasonal staff would need to be recruited, and thus offset the additional wage cost called for by the Living Wage.

As is often the case with ideas that challenge the norm, restaurant guests have greeted the abolition of tips with a controversial reception.

For many, the change was received positively: both anecdotal evidence from staff, comments on social media, and feedback via guest emails and surveys have praised the decision; with many customers happy to know that those serving them are being fairly paid, and that good service at JPRestaurants venues is genuine, rather than a superficial attempt to get a bigger tip.

For others, though, the consequential increase in menu prices has proved an issue. Although still very similar to other restaurants when a 10% – 15% tip or service charge is taken into consideration, the adjusted menu prices appear higher than some competitors where tips are expected, or where an automatic service charge is added at the end.

The changing guest experience has also led to challenges, with many guests at Jersey Crab Shack reluctant to switch from table service to app ordering: customer feedback showing that Jersey restaurant guests still want traditional interaction with a server and aren’t necessarily ready to embrace technology as part of dining out – even if it facilitates better working conditions for staff, without price increases for customers.

A small minority of guests across all restaurants have also been disappointed at not being able to leave a tip, valuing the ability to reward service at their own discretion, rather than having this taken care of by the employer.

[Postcript: After a two years in place, the system is now accepted by all customers and we get very little negative feedback. We’d be keen to see the system made mandatory in Jersey and U.K. as it is in France.]

Although the introduction of the Living Wage at JPRestaurants has been largely positive and hopefully a step towards creating fairer
and more stable employment for staff, there’s undoubtedly still work to be done. With price sensitivity and small margins common across Hospitality businesses, fairer pay across the industry can’t be achieved without change: whether it’s higher prices, increased automation, or other changes to how we experience dining out.

The challenge now is how Hospitality can persuade customers to accept these changes, to help make the industry fairer and more ethical for its hardworking employees.

First published in the Jersey Good Business Charter 2021 Report: A Good Walk – Mapping out the current landscape of Sustainability, Ethics and Good Business in Jersey

Sign up to our e-newsletter to be the first to know about news and events happening at JPRestaurants.